After nearly 100 meetings and a long drawn-out public battle to redevelop South Beach’s vacant South Shore Hospital at 500 Alton Road, a resolution is finally in sight. The Miami Beach City Commission Finance Committee worked with development stakeholders to hammer out a final agreement for a 44-story condo tower on 500 Alton Road with a 3.19 acre park deeded to the City on the 600 and 700 blocks.

After intense negotiations, the latest agreed-upon plans will see the density of the former plans stacked into a single, taller and more narrow structure. In exchange for the greater height, developer Crescent Heights will position the 410-unit building at the northeast corner of the sight to optimize adjacent views as well as deed 3.19 acres of land towards a new city-owned park.

Mayor Dan Gelber advocated for the taller design, touting benefits such as avoiding a “wall-effect” along West Avenue. “I think the newly proposed tower is within the scale of the neighborhood and slim enough to preserve view corridors,” Gelber wrote. “Because a tall tower overlooking a beautiful park will likely attract non-resident investors, it is likely many of the units would have sporadic or part-time tenants, thus decreasing congestion.”

According to Gelber, the donation of the park area would increase the City’s total parkland by 1%. There are currently 250 acres of park area in Miami Beach, excluding golf courses. As the City looks for aesthetically pleasing blue and green solutions to the sea level rise problem, Galbut said The Park on Fifth development will have “the largest amount of permeable space in Miami Beach. I think that’s turning out to be one of the biggest benefits of this entire task. That is priceless. It’s a down payment on true resiliency.”

The proposal for the site still has a number of obstacles to overcome, including securing the approval of six of seven city commissioners. Once the details have been agreed upon, the agreement will likely go before the commission in September. The city plans to require the developer to build the park before the city issues a certificate of occupancy for the condo tower.

Note. The rendering below reflects the previously proposed 42-story tower. Renderings for the new 44-story tower have not yet been released. 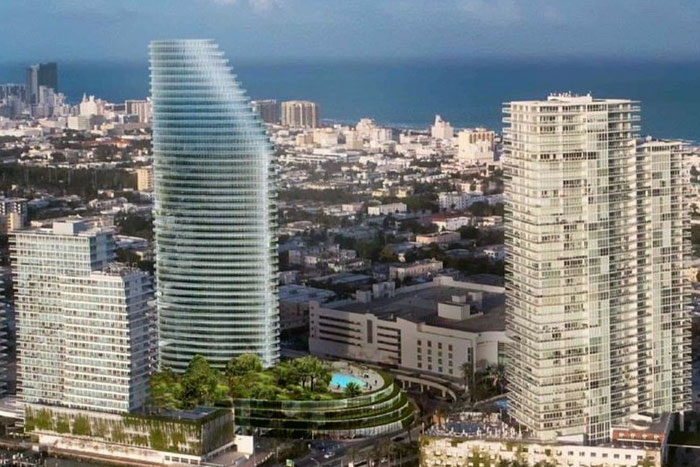 Expect the utmost level of integrity, professionalism and discretion. Niki delivers a concierge level of service and results having sold over $1billion dollars of closed sales. Let her know when you are ready !

THE SEASIDE GROUP AT DOUGLAS ELLIMAN

All information displayed on this website is subject to errors, omissions, prior sale or withdrawal without notice. All text, images, graphics, and other materials on this website are subject to copyright and other intellectual property rights of The Seaside Group at Douglas Elliman unless otherwise stated. These materials may not be reproduced, distributed of reposted to print or other websites without the express written permission of The Seaside Group at Douglas Elliman.